Does the 1996 Telecommunications Act violate the U.S. Constitution? The Leahy, Jeffords, Sanders et al. amicus brief to the Supreme Court in 2000 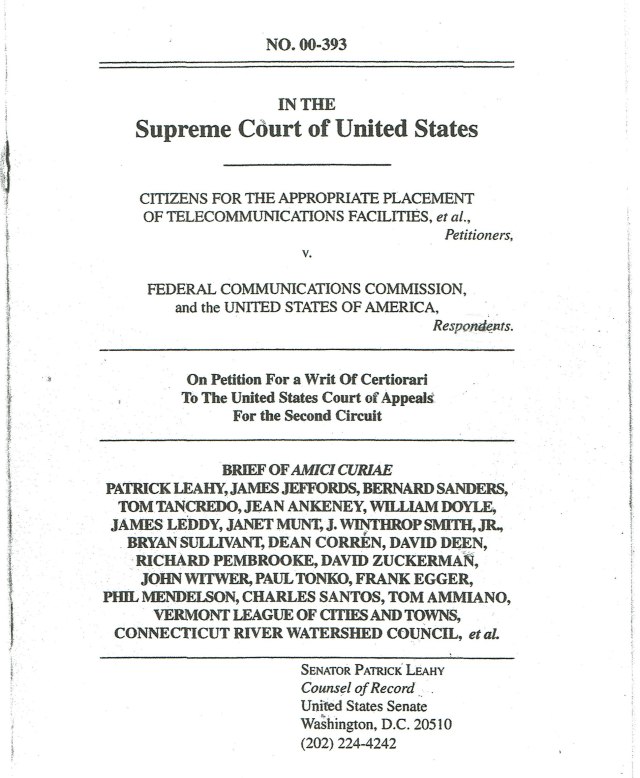 In 1997, a lawsuit was filed against the FCC by 53 parties in the 2nd Circuit Court of Appeals. The parties lost, and filed an appeal to the U.S. Supreme Court.

This amicus brief was filed in support of the appeal to the Supreme Court. It asked:

Whether Congress and the Federal Communications Commission, by requiring State or local zoning authorities to issue, or not issue, building permits for the construction of personal wireless service facilities under specific federal mandates or limitations have thereby commandeered state governmental processes in violation of the Tenth Amendment as interpreted by this Court in New York v. United States, 505 U.S. 144 (1992) and Printz v. United States, 521 U.S. 898 (1997)”

The anti-commandeering legal doctrine comes from the 10th Amendment regarding the rights of states.

Section 704 of the Telecommunications Act of 1996, and implementing Federal Communications Commission Regulations, are unconstitutional under the 10th Amendment in that they commandeer state and local zoning authorities to approve, or disapprove, building permits under specific federal mandates.”

…State and local zoning authorities, under principles articulated in New York v. United States by this Honorable Court, may not have their processes commandeered to implement a federal policy issued by the Federal Communications Commission which seeks to override local control over health, safety and local land use issues regarding the siting of personal wireless services facilities (PWSF), such as cell phone towers, by compelling an outcome determine by the Congress – the mandatory issuance, or non-issuance, of local construction permits if certain federal conditions are met.

…The authority of the Federal Communications Commission to commandeer the actions of local zoning authorities and mandate that they issue, or not issue, building permits precludes such local authorities from exercising power regarding health, safety and local land use issues and is not consistent with the Tenth Amendment of the Unites States Constitution.

…This case is thus a challenge to the Constitutionality of section 704(a) of the Telecommunications Act of 1996 (47 U.S. C. § 332(c)(7)) and to the implementing regulations of the Federal Communications Commission.

Section 704 of the Telecommunications Act of 1996 (47 U.S.C. § 332(c)(7), is an attempt to compel State or local zoning officials to address the alleged public policy problems (as determined by the Congress and the Federal Communications Commission) regarding the shortage of personal wireless services facilities (PWSF) even when granting building permits for additional PWSF in some circumstances would be inconsistent with state decisions designed to protect the health and safety of local residents.

In general, amici urge that this issue is of great importance because of the dramatic increase in the siting, construction and use of telecommunications and radio towers in communities throughout the United States. The location of such towers near homes, schools, farms, churches, hospitals, airports, highways, and the whole host of work and home environments is of great importance to the State, to local governments and citizens. There is significant concern by homeowners living near potential tower sites regarding financial harm they would suffer from reductions in the value of their property if the towers were to be built.

In addition, there is growing public and scientific concern over the adverse effects of radio frequency emissions emanating from cellular phone facilities and, of course, there have been many newspaper articles about car accidents involved drivers talking on a cell phone. Also, it is our understanding that while the FCC has established standards for the “thermal effects” from such radiation the FCC has not issued emission standards based on non-thermal biological effects at below-hearing levels which may cause biological harm.

… However, the Constitution and its Tenth Amendment does not permit the Congress to destroy this partnership of the Federal government (the Federal Communications Commission, in this matter) with the sovereign states and does not allow local or state process to be commandeered to blindly implement the federal goal of promoting more cellular phone service in the face of plenary police power held by the states.

… Yet, under our Constitution, Congress may not “conscript state governments as its agents.” Id. at 178.”

The Supreme Court refused to hear this case.

Bernie Sanders and Patrick Leahy also took Congressional action. Sanders introduced 4 bills while he was in the House of Representatives, and Leahy introduced 2 in the Senate. Dennis Kucinich also introduced H.R. 5631 in the House. These bills were to roll back provisions in the 1996 Telecommunications Act or add protections for the public. However, they got almost no support from other rmembers of Congress, and all ended up dying in committee.

Recent formal comments to the Federal Communications Commission reiterate the burning Constitutional question. They were submitted as the FCC was poised to adopt new rules September 26, 2018,  stripping additional power from states and local governments and dictating local policy on cell tower siting decisions. Lawsuits on those new rules are now underway.[1]

[1] Lawsuits against the FCC and their new rules are awaiting action in the 9th Circuit Court of Appeals, and. Congressowman Anna Exhoo’s H.R. 530 to void the FCC new rules now has 38 co-sponsors, but Republicans have so far failed to support her bill — perplexing since the GOP claims to be a party which affirms the U.S. Constitution and local authority.
https://www.congress.gov/bill/116th-congress/house-bill/530/cosponsors