The photo below is a parking meter, but if the shoe fits…… 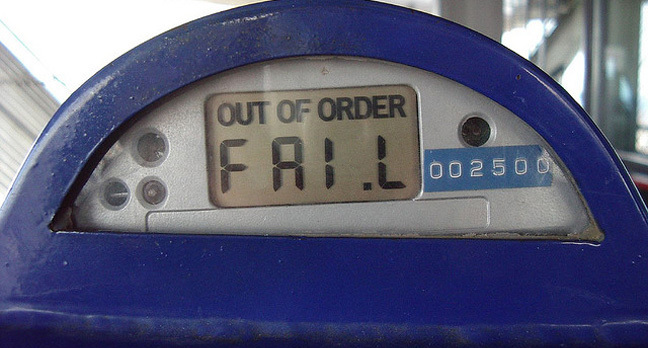 There has been yet another delay in the ongoing saga of cash-burning that is the UK’s national smart meter initiative.

While the communications infrastructure was due to be switched on today, the £11bn project’s turn-on has now been delayed again until September, the BBC has reported.

The Data and Communications Company (DCC), which is responsible for providing the communications infrastructure for smart meters’ readings, is a subsidiary company owned by Crapita (often comically referred to as “Capita” by Private Eye), infamous for its outsourcing “successes”.

At the moment, Crapita has only managed to complete the design and build phase of the project, and despite plans to have it in operation by April last year, DCC is still testing the system ahead of the new live-date in September this year.

A spokesperson for the subsidiary told The Register: “As indicated by the Department, the timetable for the roll-out of the new infrastructure will allow for testing of the system to ensure that it will deliver a long-lasting and effective system.”

The project, which according to a 2014 Impact Assessment will arrive with a £11bn bill for consumers, was previously described as in danger of becoming a “costly failure” by a government report after a farcical number of delays and internal government warnings that it would most likely not be completed for another 50 years.

Last year, the Institute of Directors warned that the smart meter project would add billions to consumers’ bills and that the rollout “should be ‘halted, altered or scrapped’ to avoid a potentially catastrophic government IT disaster”.

Formerly run by the Department for Energy and Climate Change (DECC) — which has now become the Department for Business, Energy and Industrial Strategy (BEIS) — the project was initially intended to be operational by April 2015, though it was subsequently delayed until April 2016, then August 2016, and is now slated for September 2016.

Responding to The Register when we enquired regarding the delay, a BEIS spokesperson acknowledged the delay’s existence but did not provide any explanation of its cause, instead stating: “The roll-out of smart meters is the one of the most significant upgrades to Britain’s energy infrastructure making it fit for 21st century life.

“The new infrastructure is planned to go live at the end of September.” BEIS added, “It is currently being tested to deliver a long-lasting, world class system to bill payers. In the meantime energy suppliers continue to drive forward the programme, rolling out more than 3.6 million smart meters to homes and business across the country.”

This entry was posted in Uncategorized and tagged BEIS, Britain, cost, Crapita, Impact Assessment, initiative, Institute of Directors. Bookmark the permalink.
%d bloggers like this: